A ‘Tonight Show’ experience is live in Fortnite - Bliteoc

A ‘Tonight Show’ experience is live in Fortnite 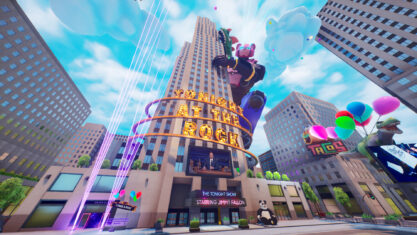 The Tonight Show Starring Jimmy Fallon and Samsung Mobile have teamed up to bring a ‘Tonight at the Rock Powered by Samsung Galaxy’ metaverse gaming experience to Fortnite.

The experience will be a part of Fortnite Creative and showcase an in-game recreation of iconic New York City sights, including Central Park and Times Square, "alongside notable The Tonight Show locations like Rockefeller Center and Studio 6B." The companies say this will allow players to take a virtual trip around the building and explore what the studio has to offer, including 'The Tonight Show's'' writer room and a virtual Samsung Store.

The experience includes minigames native to The Tonight Show, like Giant Pong, and game modes like Race Up the Rock, Cabbie Crash Course, and Escape Studio 6B. "Over the past few years, I’ve been lucky enough to partner with Samsung on almost any idea we can dream of," said Fallon in a statement. "This time, I asked them if we could do something with Fortnite. They immediately said yes, and we’ve created a gaming experience that brings together fans of The Tonight Show and fans of Fortnite."