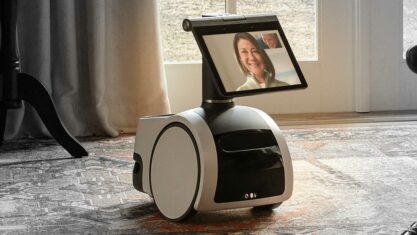 Amazon's Wall-E-looking Astro robot that is touted as a helpful tool for taking care of aging family members, as a smart home display and a home security robot, has started making its way to people's homes.

Astro is equipped with a camera that scans your home to look for intruders, family members and your home's overall architecture and layout. The same camera is also used for video calls along with a built-in speaker that is Alexa-enabled.

The robot, which is available through an invite-only program, started shipping back in November. However, videos of people using it have only recently started emerging.

This recent video uploaded by 'Bob Rekieta' on YouTube (seen below) shows the Amazon Astro accepting a command and fulfilling it, albeit ungracefully.

Astro is tasked to deliver a beer -- which is already in its built-in cup holder -- to its human owner 'Celeste.' The robot takes a little while to register the command, but then swivels around to look for its human. Upon finally identifying 'Celeste,' Astro rushes towards her with the words "Hi Celeste" visible front and centre on its scree.. um.. face.

While the process of Astro fulfilling commands does look intriguing, there are some issues that will deter people from welcoming the Amazon robot to their house.

According to a September story by The Verge (covered by MobileSyrup), leaked documents that reportedly come from Amazon employees working on Astro claim it's a disaster that's not ready to be released. The report also takes into account a second employee's statement, who says that Astro is terrible and that it's absurd to think of it as an elder care device.

A separate September report from Vice states that Astro is not very sturdy and that a few of its test devices have already broken. There are also reports claiming that the device isn't great at identifying people and will follow around anyone it thinks is an intruder.

While there haven't been any complaints regarding Astro flinging itself off stairs like everyone initially thought, I also haven't seen videos where the Astro encounters stairs, so we're not sure how the robot will behave when it eventually does encounter steps.