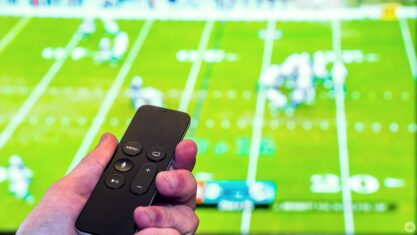 Speculation is beginning to swirl that Apple is attempting to bolster Apple TV+ by bidding on the rights to broadcast live sports ranging from NASCAR to Sunday night football.

An analyst from Wedbush thinks that since Apple has yet to make any public moves to acquire a movie studio, this might suggest that it's going an alternative route and instead will pursue live sports.

The report further singles out some specific leagues that Apple could nab the rights to stream over the next four years. This includes NFL (Sunday Night Ticket), Big Ten, Pac 12, Big East, Big 12, other NCAA sports packages (2024 timing), NASCAR, and the NBA/WNBA.

This builds on rumours from earlier in 2022 that Apple is talking to Major League Baseball to broadcast MLB games on its streaming service.

It's expected that Apple is sitting on 20 million paid TV+ subscribers. Combining that with people who share a single screen and the plethora of Apple TV+ free trials, the actual viewership is much larger at 45 million people. According to MacRumors, the company spends $7 billion USD ($8.7 billion CAD) on content yearly but has roughly $200 billion in cash that it could use to snap up probably whatever it wants.

While Apple was initially expected to buy a movie studio like A24, the company has been slowly building up the base on Apple TV+ by purchasing the rights to individual shows and movies. The company could likely still buy a few sports deals and a movie studio or two. It's hard to gauge what Apple deems more important.

In Canada, streaming live sports is already a bit of a pain because of some regional broadcasting rules. For instance, there isn't even a single service that will allow you to stream every NHL game. While I'd like to believe that Apple getting into the space may help some people access their favourite teams, I'm worried it will fracture an already difficult to navigate online sports streaming space. I guess that just means I'll be writing more sports-themed how-to stream' guides...