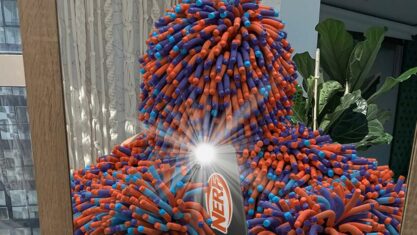 Murph, the bizarre new mascot for Nerf that's taken the internet by storm, now has his own Twitter account.

On June 23rd, the toy weapons company's demonic foam creature, which has the handle of @MurphFromNerf, made their first tweet. (Nerf says Murph is non-binary and uses "they/them" pronouns.)

"Ok Twitter, I’m here now. I had foam-o," tweeted Murph with a selfie.

Murph is part of Nerf's new "Unleash the Play in You" campaign, which aims to get people to go outside and play.

“We wanted to introduce a mascot that represents this ageless, unbridled fun that lives in all of us and creates a physical embodiment of that feeling you get when you play with Nerf,” Adam Kleinman, Hasbro's senior vice president and general manager, recently said in a press statement.

It's unclear how this Nerf dart-covered entity is meant to do that, exactly. In fact, it seems as though this would be a monster that terrorizes children, Pennywise the Clown-style, rather than fill them with excitement. Now, Murph can haunt adults on Twitter, as well.