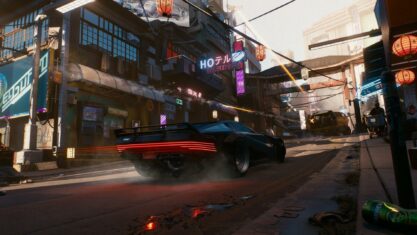 Despite Cyberpunk 2077 being a near-absolute mess when it was first released back in 2022, CD Projekt Red (CDPR) has continued to support the beleaguered open-world title with several patches.

However, the game's anticipated current-gen Xbox Series X and PlayStation 5 update hasn't yet appeared, though it seems that might change soon.

Back in October CDPR delayed all fixes and free DLC for Cyperpunk 2077, stating that a "major update" would arrive in 2022 alongside its current-gen/next-gen "enhanced" update. Fast-forward to now and the developer revealed in a tweet that it's set to make an announcement on Tuesday, February 15th at 10am ET/7am PT.

Adding to this rumour, Cyberpunk 2077 now shows up as "optimized" on the Xbox Series X/S, and a PS5 edition of the title appeared on Sony's PlayStation Network back in January. The enhanced update also seems to already be hitting some players' consoles.

The enhanced update will be free to anyone that already owns the Xbox One/PlayStation 4 version of the title. CDPR is also expected to release an upgraded version of The Witcher 3: Wild Hunt for the Xbox Series X/PlaySation 5, though it likely won't release until Q2 2022.