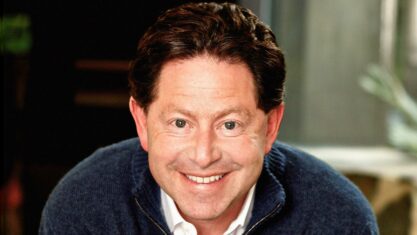 Citing multiple company sources, the WSJ says Kotick is currently only expected to remain as CEO until Microsoft's $68.7 billion USD (about $86 billion CAD) acquisition of Activision Blizzard has closed. Microsoft expects this to be completed "in fiscal year 2023,” which means Kotick will likely remain as CEO for up to 18 months. It's unclear whether other leaders are expected to depart as well.

Kotick has faced numerous calls to resign following a July 2021 California lawsuit alleging a years-long "frat boy culture" that led to sexual harassment, abuse and unfair hiring practices towards women. Then, in November, a WSJ report alleged that Kotick was not only aware of these issues, but actively worked on keeping them out of the public eye.

Kotick, meanwhile, has said he'll only do so if the company's issues aren't fixed "with speed." In a new interview with The New York Times regarding Microsoft's acquisition of the company, Kotick also wouldn't confirm whether he'll step down after the deal closes, simply saying he'll be "available as needed."

Of course, the deal needs to actually be approved by all of the requisite U.S. regulators and lawmakers. While it's possible it could be blocked, Microsoft (post-Activision Blizzard acquisition) would still only account for less than 15 percent of total gaming revenue behind Sony and Tencent. Therefore, analysts expect that it will likely go through.

It's worth noting that Spencer had previously said he was "deeply disturbed" by the allegations surrounding Activision and that Xbox was reevaluating its relationship with the company accordingly. Following the news of the acquisition plans, some gamers have pointed out that acquiring the company full-stop is an odd way of doing that.

However, given the legalities surrounding a major acquisition like this, it's unlikely that Microsoft could comment further on the issues. As VentureBeat's Jeff Grubb pointed out on Twitter, Spencer or other Microsoft executives providing any elaboration could have been seen as "price manipulation" that would have impacted the deal.

In a statement posted to Twitter, the ABK Workers Alliance, a group made up of employees of Activision, Blizzard and King, said the acquisition news is "surprising" but "does not change goals" with regards to improving Activision Blizzard.

"The news of Activision's acquisition by Microsoft is surprising, but does not change the goals of the ABK Worker's Alliance. We remain committed to fighting for workplace improvements and the rights of our employees regardless of who is financially in control of the company. We will continue to work alongside our allies across the gaming industry to push for measurable change in an industry that desperately needs it. We called for the removal of Bobby Kotick as CEO in November for shielding abusers and he still remains CEO as of this writing. The strike for Raven QA is in its fifth week, and our striking staff has still not received response from leadership regarding our request to negotiate. And finally, 3 out of 4 of our original collective demands to improve the conditions of women in our workforce have not been met. Whatever the leadership structure of the company, we will continue our push to #EndAbuseInGaming, and appreciate the outpouring of support we've experienced in the last year.

The Raven strike, in particular, is referring to dozens of developers at the studio behind Call of Duty: Warzone protesting the sudden termination of 12 quality assurance (QA) contractors. QA plays a significant role in ensuring that a game runs sufficiently, and Warzone has been plagued with bugs amid these layoffs. Multiple QA workers told The Washington Post that they attribute these issues to Raven's now-reduced QA team. Others said to Inverse that Activision Blizzard has yet to address their concerns.