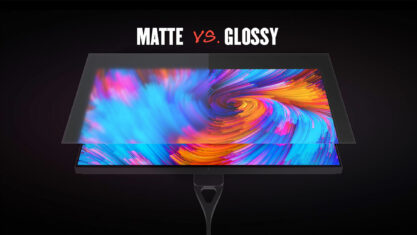 Glossy gaming monitors have a clear edge over matte variants They produce a clearer, brighter and more vibrant image, with the only drawback being that they cause glare under direct light.

That's why companies typically prefer developing matte gaming monitors, even though they make the image look a little dull and diffused.

Now, as reported first by Gizmodo, Eve is working on a solution and has officially announced an upgrade to its 2021-released Spectrum monitor. After working with LG, Eve is setting up to add glossy screens to its 4K 144Hz Spectrum and QHD 280Hz Spectrum models.

"One of the reasons why there are no glossy gaming monitors on the market is because of the amount of additional R&D and factory recalibration required," reads the company's blog. "Glossy coatings require additional changes to the polarizer film, which is an integral part of the LCD module. The Polarizer is a filter that controls light waves and makes the display content visible."

According to Eve, working with LG allowed it to modify the polarizer film to generate a glossy look with more contrast and clarity than matte displays.

The company sent over an engineered sample to Dave2D, who, right off the bat, said that the glossy display "is so much nicer to look at and provides a way better visual experience than the regular retail unit (matte model), though he mentions glare as a drawback.

While Eve hasn't revealed a potential release date or the monitor's cost, the company did say that those interested should stay tuned for further updates. The company says it'll drop information about the monitor on its newsletter and Discord server.

A word of caution to those interested. The past two years have been tough for small-time tech players, considering that even the biggest names in tech have faced supply chain issues. Eve has faced criticism from potential buyers about its delayed shipping timeframes, with customers having to wait months to receive their Spectrum monitors.

The company talked about issues it was facing with its shipping partners and macro supply chain issues in this blog post. Since then, Eve has hired a new global logistics manager and is in talks with third-party logistic companies and distribution partners. The company plans to offer standard and express shipping from local warehouses, instead of shipping each product from Hong Kong, like it originally did.

"This ensures that shipping costs are kept as low as possible, and delivery time is as short as can be," reads the blog post.

While the update sounds optimistic, I wouldn't hop on the pre-order train, and would rather wait to see how efficiently the company handles shipping for the upcoming glossy monitors.