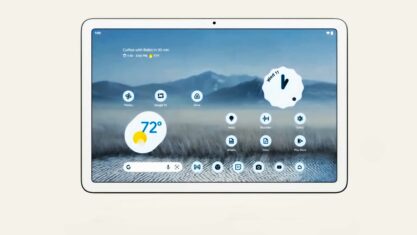 Details about the Pixel Tablet display have been leaked. The leak comes from Kuba Wojciechowski through 91mobiles.

Wojciechowski received the information from shipping EVT (engineering validation test) units to India, which indicates that there will be two storage versions Reportedly, there will be a 128GB model and a 256GB model, and both will feature Wi-Fi 6.

The EVT also indicates that the tablet might launch before the Pixel 8 next year. This makes me think that it may come in the spring alongside Google I/O and the A-series Pixel, or during the summer around when the Pixel Buds Pro released this year.

Further, the Pixel Tablet features a 10.95-inch display, which will likely be around 11 inches when officially marketed. The display will support USI stylus standard --  with confirmation of a USI 2.0 stylus from Google.

9to5Google also says that Google is also working on a second 'Pro' tablet. It's not clear what specs the Pro tablet would use, with the only evidence so far suggesting it would have a different rear camera sensor than the Pixel Tablet. Given how Google has typically approached devices with the 'Pro' monicker, the Pro tablet could ship with improvements like extra RAM, a better display, or a better camera system (if not all of those).

The Pixel Tablet is expected to come out sometime next year.