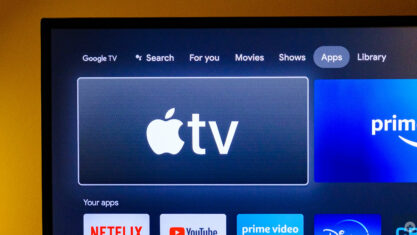 If you live between two ecosystems (like a lot people), you'll be shocked to know that Apple is no longer letting users rent or buy content from the Apple TV app on Google and Android TV-powered televisions.

In fact, as of right now Apple TV app isn't working at all on my Chromecast with Google TV.

On March 16th, a user on Reddit posted that the Apple TV app on their Android TV (Nvidia Shield) is not allowing them to buy or rent movies. Many other users in the comments have experienced the same issue.

You can still access the Apple TV app on Google and Android TVs, but you can only view content you've already bought or subscribed to. If you want to rent or download shows from Apple, you need to purchase the TV show or movie on another device before you can watch it on a Google TV.

There's speculation that Apple pulled the functionality from its app on Google's platform due to issues stemming from the tech giant taking a 30 percent cut of revenue of sales in its app stores. However, there has been no official confirmation from Apple regarding this change. MobileSyrup has reached out to Apple for more information.

If true, this would be strange for Apple to pull this move. Over the past three years, the company has received significant scrutiny for imposing its own 30 percent tax on transactions made in the App Store and on its other digital platforms.

I could speculate all day why Apple might have done this, but the possibility that seems the most likely to me is that the company and Google had some sort of pricing agreement, and now that deal is over. In an effort to strong-arm Google to renew on Apple's terms, the company has made its app less functional for Google's customers.

Apple is in a unique position where it's possible this move might work in its favour. I'd guess that since there are likely few Apple TV users on Google-based devices the blowback will be minimal. If the roles were reversed and Google was limiting YouTube on Apple TVs, I suspect people would be gathering their pitchforks.

In late 2021, Google simply threatened to remove YouTube from Roku devices, but somehow the two companies worked out that deal in the final hours.

That said, it's still dissapointing to see Apple play boardroom games like this since I thought we'd moved past the days of companies being petty and harming consumer experiences, at least to some extent.

This is amusing since Apple's own app App Store has a rule prohibiting developers from asking users to go to a different location to sign up. For instance, Spotify doesn't want to pay Apple a cut of its profits when new subscribers join its service on Apple devices. Therefore there's no way to sign up for Spotify Premium in the iOS app. There isn't even a line that pushes people to sign up on Spotify's website. Instead, it says, "You can't upgrade to Premium in the app. We know it's not ideal." This situation could change in the future though.

If you only had a Google TV and you really liked renting from Apple you're likely screwed, but I suspect that almost all users will be able to find a way to rent content via YouTube, on an old Apple device or via the web.