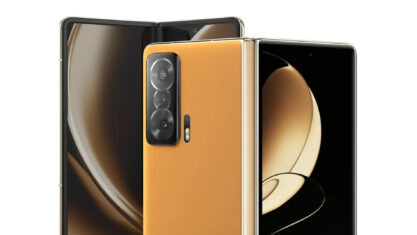 Honor's latest flagship device, the Magic V was announced today, and what makes it unique is that it's the first foldable device to feature Qualcomm's latest 4nm Snapdragon 8 Gen 1 chipset.

The Magic V folds inwards like a book, similar to Samsung's Galaxy Z Fold 3 and features a huge 7.9-inch primary OLED display (120Hz) and a 6.45-inch curved OLED cover panel (90Hz). The foldable features a unique waterdrop hinge mechanism which the company says is the slimmest among similar devices on the market.

On paper, the foldable sports an impressive triple camera setup, including a 50-megapixel main sensor, a 50-megapixel ultra-wide shooter, and a 50-megapixel colour spectrum lens. On the front, the device features two 42-megapixel selfie cameras, one hole-punched on the primary screen and one over the cover panel. How these cameras work is yet to be seen, but as mentioned, the Magic V's specs seem decent.

Diving deep into the internals, all Magic V models feature 12GB of RAM as standard, with storage options ranging from 256GB to 512GB. The device has a chunky 4,750mAh battery -- which is bigger than the Fold 3's 4,400mAh battery -- and supports 66W charging. It also runs Honor's in-house Magic UI 6 built on top of Android 12 with support for split-screen and multi-window.

As always, we don't know when and if the foldable will release for the international market.