If Liverpool complete signing of “generational talent”, Jurgen Klopp’s 4-3-3 will be insane - Bliteoc

If Liverpool complete signing of “generational talent”, Jurgen Klopp’s 4-3-3 will be insane

1 month ago 54
The 19-year-old is a very natural and modern midfielder, possessing a set of skills that could see him play in a variety of midfield roles from defensive midfield up to attacking midfield.
He’s perfectly comfortable in a two or three-man midfield and would offer any side flexibility to play a number of ways.
However, at Liverpool, there’s only one way to play; on the front foot.
His ball-carrying ability, physicality, strength, defensive work rate and quality on the ball would see him be a perfect foil in Liverpool’s three-man midfield alongside Fabinho and Thiago.
Whilst Fabinho would protect the back four, Bellingham would offer a genuine box-to-box role that would allow Thiago more freedom which would help him reach those consistent levels more often.
The former Birmingham City midfielder showed his quality in the Champions League against Manchester City, and even at 18 years old, he managed to compete and get the best of a dominating Manchester City midfield.
Klopp has always identified midfielders with energy and ball-carrying ability to drive his team forward, and that has seen similar profiles of players signed/targeted.
The Reds have already been linked with Nicolo Barrella too – another example of a player that fits the system – and Bellingham can too adapt to this system.
Given his quality already, there’s no way he wouldn’t be a starter for Liverpool, and would no doubt become a key player if signed.
Pedigree at a young age
Bursting onto the scene (Micah Richards style) his shirt number was retired after leaving Birmingham for Dortmund in 2020.
This was something done “to remember one of our own and to inspire others” in a story that saw Bellingham reach the mainstream in England.
He’s already managed to win the DFB-Pokal in 2020/21 in Germany, as well as being one of the frontrunners for the inaugural Golden Boy award this year.
The 19-year-old’s temperament is also something that is clear to see; a hard-working individual on and off the pitch, who hasn’t been involved in any scandals or wrongdoings off the pitch like certain young stars.
Dortmund's Norwegian forward Erling Braut Haaland (C) celebrates scoring the 4-0 goal with Dortmund's English midfielder Jude Bellingham (L) and Dortmund's English midfielder Jadon Sancho during the German first division Bundesliga football match FC Schalke 04 vs Borussia Dortmund in Gelsenkirchen, western Germany, on February 20, 2021.
To have such a level head at his age is remarkable and means a step up to a big club will most likely be something he takes entirely in his incredibly long strides.
Many believe he is England’s ‘generational talent’ and with his mentality and calmness shown from his professional career to date, it seems he can continue to rise and reach the heights. 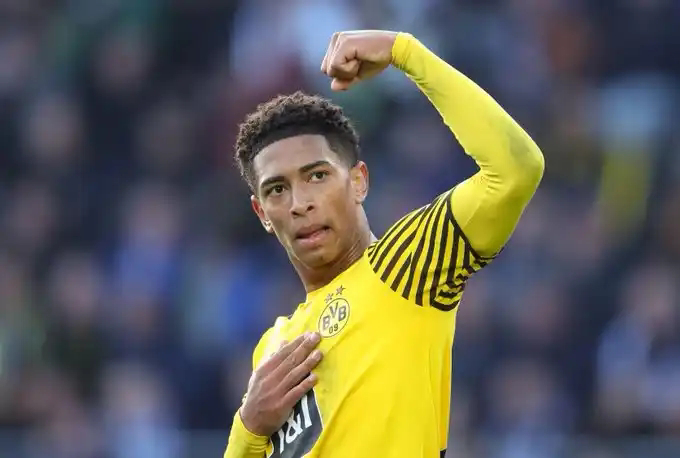