Machine Gun Kelly will be a playable character in WWE 2K22 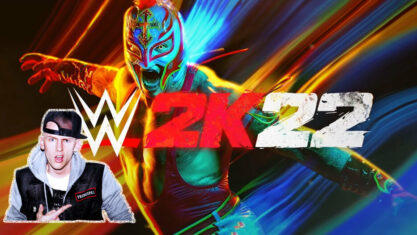 After being trolled for his awkward shooting form during the NBA All-Star Celebrity Game, Machine Gun Kelly (MGK) is ready to appear in another game, but this one isn't in real life.

The rapper turned pop punk artist announced that he will be a playable character in WWE 2K22 and tweeted that "you can slam me through a table as much as you want." Eminem, G-Eazy and Corey Taylor's pre-orders are in 😂.

However, don't expect to play as him or against him on March 11th (WWE 2K22 release date). 2K says that MGK would be introduced to the game as part of a post-release DLC drop, which, as of right now, doesn't have a tentative release date.

MGK has long been a fan of WWE, and has appeared in the ring on more than one occasion. He is also working as executive producer for the upcoming game's 12-track playlist that includes music from Toronto-born The Weeknd, British rock band Bring Me The Horizon, American hip-hop staples Wu-Tang clan, and more, including himself.

Check out the full tracklist below: