1 week ago 28
Manchester United remain on the hunt for Barcelona midfielder Frenkie de Jong. Despite being unable to agree a fee with their La Liga counterparts, the Red Devils are still optimistic a deal can be struck. And he’s not the only player Erik ten Hag is interested in at the current moment in time 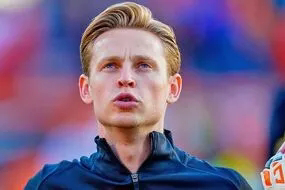 Manchester United are still expected to add to their squad, despite dragging their feet during negotiations with Barcelona for De Jong.
The 25-year-old is Erik ten Hag’s top target, having previously won two trophies playing under his fellow Dutchman at Ajax.
In goal, United admire Daniel Bachmann - who could arrive at a time where Dean Henderson appears to be heading to the exit door amid interest from Premier League new boys Nottingham Forest.
With Jurrien Timber looking unlikely, United may raid Ajax for Lisandro Martinez instead - while Denzel Dumfries is being eyed at right-back.
Christian Eriksen, like De Jong, is a target for midfield.
And, up top, the Red Devils want Antony to move to Old Trafford. So, with that being the case, Express Sport will now take a look at how they could all fit into the Red Devils’ 25-man squad for next season.
But both De Jong and Eriksen are priorities for Ten Hag, who believes both players can have big impacts at United.
Should they sign, they can then fill the voids left behind by the departures of Nemanja Matic and Paul Pogba.
Fred, Scott McTominay, James Garner and Van de Beek could go alongside De Jong in the middle of the park.
And Eriksen would then be able to compete with Bruno Fernandes and youngster Hannibal Mejbri for a starting berth.
United may have no choice but to stick with Anthony Martial, with suitors for the France international presently in short supply.
And he could have to compete with Antony for a starting berth, with Ten Hag keen on a reunion with his Ajax pupil.
The Brazil international would be a good addition to the Red Devils, especially when you consider their struggles on the right-wing in recent years.
Youngster Alejandro Garnacho is set to play a more prominent role for the club next term.
And Marcus Rashford, Jadon Sancho and Cristiano Ronaldo are other options for Ten Hag’s attack.
Source