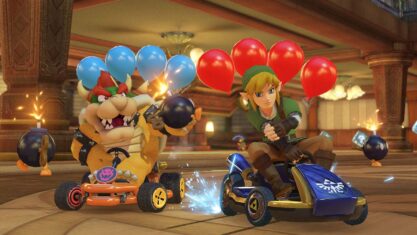 It looks like Mario Kart 9 could be currently in the works.

"I am aware Mario Kart 8 Deluxe is still selling very well on the Nintendo Switch, but Mario Kart 9 is in active development," said Toto in a feature focused on game industry predictions for 2022.

Toto goes on to say that Mario Kart 9 will feature a "new twist" of some sort, which has been a franchise mainstay for years. For example, Double Dash on the Game Cube features two-character karts and Mario Kart 8 offers anti-gravity portions of tracks. It's unclear what Mario Kart 9's main draw could be. Interestingly, the report doesn't mention if Mario Kart 9 is coming to the Switch or if the game's release is targeted at the console's successor.

In the same report, Toto went on to state that Nintendo also has plans to bring another one of its core franchises to smartphones.

Across Mario Kart 8 and Mario Kart 8 Deluxe, the game has sold more that 40 million units and is widely regarded as the best entry in the series. What blows my mind the most is that Mario Kart 8 was first released on the Wii U roughly seven and a half years ago. With this span of time between Mario Kart releases in mind, it's unsurprising that another title in the franchise is reportedly in the works.