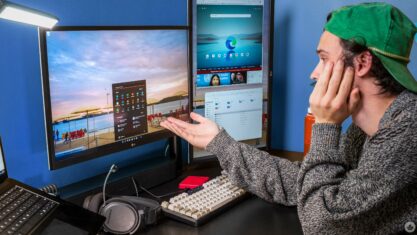 Windows 11 will soon get a new desktop watermark that will display in the bottom right-hand corner of the screen on PCs that don't meet the operating system's strict hardware requirements.

As spotted by Ars Technica, the change is currently live in the Windows Insider Release Preview channel that serves up release-candidate builds a few days or weeks ahead of official deployment. Build 22000.588 adds the warning message, which reads:

"System requirements not met. Go to Settings to learn more"

The message presumably appears on PCs that don't meet one or more of the system requirements of Windows 11 -- requirements that stirred up significant debate back when Microsoft announced the OS.

A short, simple summary is that Microsoft added various system requirements to Windows 11 to improve the baseline security of Windows. Unfortunately, many of those requirements resulted in dropped support for a wide range of devices from pre-2018. Requirements include support for TPM 2.0 and Secure Boot, as well as running certain up-to-date CPUs.

Part of the controversy around Windows 11 hinged on TPM 2.0 support -- something that many PCs had, but was turned off by default. In other words, many people had PCs (often custom-built ones) that could meet the requirements if they enabled TPM 2.0, although it often wasn't clear how to do that. By now, though, most people will hopefully have figured this out.

Still, that leaves tons of perfectly fine, albeit old, Windows machines out there that can't run Windows 11 because Big Daddy Gates said so (obviously this is a joke and Bill Gates likely had no impact on this since he stopped handling day-to-day operations at Microsoft in 2008). For example, Ars noted that it saw the message on a PC that supports TPM 2.0 and Secure Boot, but runs an unsupported 6th Gen Intel Core CPU.

Moreover, although Microsoft added all these system requirements, it also allowed users to work around them and install Windows 11 on unsupported PCs. That said, the company warns people about doing that during the install process and the company has threatened to withhold updates from unsupported systems (but hasn't done so yet).

All this means is that people with unsupported PCs on Windows 11 will start seeing the watermark reminding them that their PC is unsupported soon, assuming they keep on top of updating their PC. At this time, it doesn't appear that the update impacts functionality at all, besides adding the watermark. So, if some text on your screen doesn't bug you, there's not much to worry about (and if it does bug you, there might be a way to remove it if you're tech-savvy).

Perhaps the most worrisome part is that the addition of the watermark could herald future changes that further separate supported and unsupported Windows 11 PCs.