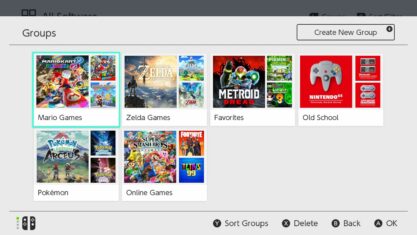 The latest Nintendo Switch update (version 14.0.0) is now available, and it brings with it a long-awaited feature: the ability to create folders.

Now, you can create custom 'Groups' of up to 200 games and/or apps with whichever title you want. Up to 100 groups can be created. As an example, Nintendo cites specific groups for Mario, Zelda and Pokémon games.

The only requirement to create Groups is that you have a minimum of 12 software titles downloaded to your Switch. If that applies to you, then you can create a Group by heading to the Switch's Home page and selecting 'All Software.' From there, press the L Button to view your software by groups. Now, select 'Create New Group' and add your desired titles.

The Switch recently turned five years old, and during that time, fans have been calling for a way to organize their games, especially as rival consoles from Xbox and PlayStation have allowed players to do so.

In addition to Groups, version 14.0.0 changes Bluetooth audio volume behaviour so you can adjust the volume on either the Switch or the Bluetooth device itself.