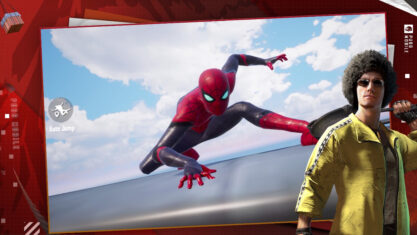 Fortnite recently added Spider-Man and his web-shooters to the game, and the new item was instantly successful. PUBG Mobile is now following suit with its version 1.8 update, and the web-slinger is in the game for a limited time, starting today.

Spider-Man is available to play alongside in the Erangel map until January 14th, after which the web-slinger will rotate to the Livik map and stay there until February 14th. In both the maps, you'll fight alongside Spider-Man to take down a boss. Watch the video below for reference:

Defeating the boss will award you advanced supplies, including a Web Shooter and a Spiderweb Ball. Additionally, new Spider crates scattered around Erangel can drop regular supplies, as well as Spider-Man items.

Read the complete PUBG Mobile Update version 1.8 release notes here to learn about everything new added to the game.

The Spider-Man update also coincides with PUBG PC becoming free to play.  The news was announced during The Game Awards 2021 in early December, and the game officially went free-to-play yesterday, Wednesday, January 12th.

All eligible players will receive the freebies on their first login after the free-to-play transition.

It's worth noting that new players can also purchase the Battlegrounds Plus upgrade for $12.99 (roughly $16.25 CAD).