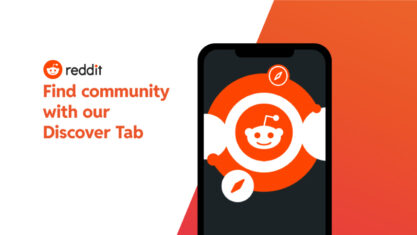 If Reddit already wasnt addictive enough, the San Francisco, California-based company announced today that it is adding a new Instagram-like discover tab to its mobile app that will show users a curated list of content, including photos, videos and GIFs.

This is the first major change introduced to the app in the last two years and will allow users to find unearthed content from subreddits similar to those they normally interact with.

The discover tab sits second from the bottom left, and replaces the communities, custom feeds and subscriptions tab.

"We’re making discovering relevant content and communities more intuitive with the Discover Tab. It’s a great new way for people to explore and engage with hundreds of thousands of communities around the world."

Once you click on the new Discover tab, you'll be greeted by a topic filter that allows you to look for content and communities regarding a specific topic, and right underneath the tab is where the content is shown.

Reddit says that during testing the new feature, one in five testers joined at least one new community,  alluding to the fact that the new tab is working the way it's intended to.

In addition to the Discover tab, Reddit is also introducing new Community Drawers and Profile Drawers to its mobile app. The former of the two drawers include 'Moderating Entry Points' for mods to see information about their subreddits, 'Your Communities' where you can see all the communities you are subscribed to, 'Following' and 'r/all.' Community Drawers can be pulled up by tapping the drop-down menu from the top left of the home screen.

On the other hand, the Profile Drawer is where users would now go to access their profile and customize it. The drawer can be pulled up either by swiping left or tapping the profile icon on the top right.

The new features are rolling out today for the Reddit app on iOS and Android.