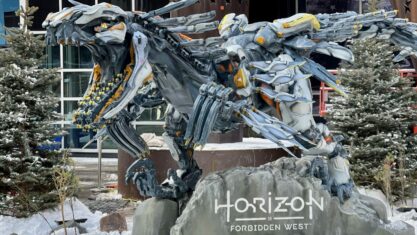 To celebrate the launch of Guerrilla Games’ Horizon Forbidden West, Sony Interactive Entertainment has set up a Clawstrider in Maple Leaf Square, Toronto. The installation will be set up until March 4.

In Horizon Forbidden West, players experience the latest journey of Aloy as she explores the post-apocalyptic west coast on a mission to save the remaining population. Along the way, Aloy encounters many dangerous machines, including the fast and deadly Clawstrider.

For the next two weeks, fans can travel down to Maple Leaf Square and check out the statue. It’s certainly not hard to miss as it stands at 11.5 feet tall.

The installation is quite fitting. Maple Leaf Square is colloquially referred to as Jurassic Park as it’s the home of the Toronto Raptors. Outside of the pandemic, hundreds of fans will commonly gather and cheer outside the Scotiabank Arena. Now, Jurassic Park is home to one of HEPHAESTUS’ creations.

If you’re unable to make it into Toronto to see the Horizon Forbidden West installation, PlayStation Canada’s Twitter account dropped a little video to check out.

Toronto isn’t the only location a Clawstrider has set up a temporary shop. In addition, Sony has delivered a statue in Dubai, Sydney Moscow, Seoul Warsaw, Madrid, Berlin, New York City, and San Francisco.

Horizon Forbidden West is currently available on PlayStation 4 and PlayStation 5. SIE is partnering with WWF-Canada and donating $1 from each copy sold in Canada.