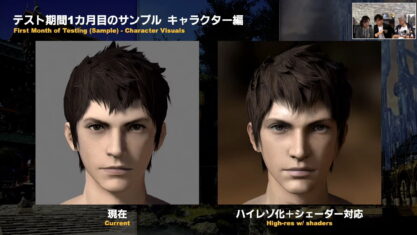 During a "Letter from the Producer" live stream Final Fantasy 14 Online director and producer Naoki Yoshida revealed plans for the future of the game, including support "for the next 10 years." Amongst these improvements is expanding solo play coming in the near future. A graphical overhaul of the game will launch sometime further down the line.

Kicking off with Patch 6.1 solo play will become much easier in the hit massively multiplayer online role-playing game. The patch, coming sometime in April, will expand the Trust System, allowing for solo players to tackle more content with a squad of non-player characters.

This change will also make for a more "accessible" experience for solo players in low-level dungeons and trials.

Yoshida said both characters and environments will be improved with higher resolution models, new textures, and improved lighting/shadow effects. The visual upgrades are set to launch with the title's next expansion, but no exact release date was given.

Some of the other announcements made included new weapon enhancements, a rouge-lite dungeon area, a new area for players to build and grow crops in. All of these changes will debut in upcoming patches.

Lastly, Yoshida mentioned that the Final Fantasy 14 Online free trial will reopen for players starting February 22. The trail was taken off online storefronts after the game saw an overwhelming influx of players in recent months.