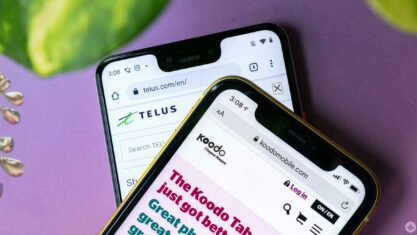 Telus is offering a solid win-back promotion to its flanker brand Koodo's former customers, at least that was the case for RedFlagDeals user 'fantasia87.'

According to 'fantasia87,' they ported two lines from Koodo to Fido in December. Earlier this week, 'factasia87' got a call from Telus (not Koodo) about its win-back promotion, offering a 30GB plan for $50/month on each of the two lines. The closest plan Telus has from the one offered is its $80/month 20GB plan or its $90/month 40GB plan.  Similarly, the closest plan Koodo offers is its $55/month 10GB plan, so this win-back promotion is already shaping out to be a good deal.

What makes this good deal great is that Telus was able to offer 'fantasia87' an additional $7.5/month for 24 months discount on each line, bringing the cost of the plan down to $42.5 per month.

In addition, 'fantasia87' mentioned to the Telus rep that they have an active Telus home internet connection as well, to which they were able to get an additional $15/month for 24 month discount on each line, effectively bringing the cost of the plan down to $27.5/month for 24 months along with a $40 one-time credit.

So if you've recently left Koodo for a different carrier, it might make sense to get in touch with them to see if a similar win-back offer is available for you.