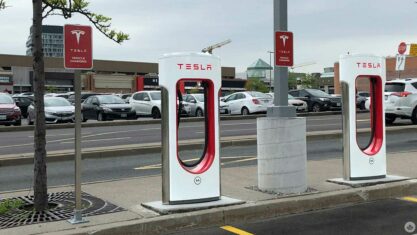 A Tesla Supercharger under construction for months in Surrey, B.C., has been vandalized.

According to reporting by InsideEVs, the charger had 12 stalls. A Twitter user reports four of them are now vandalized. Construction started in October 2021, and all that remained was turning on the power, the publication reports.

Tesla's Canadian division believes those responsible tried to extract copper from the charging cable and sell it.

This isn't the first time this particular site has been the target of vandalism. InsideEVs reports chargers were tagged with graffiti, and protective plastic covers were removed. It's not clear if the two incidents are connected.