The Cuphead Show! to premiere on Netflix on February 18 - Bliteoc

The Cuphead Show! to premiere on Netflix on February 18 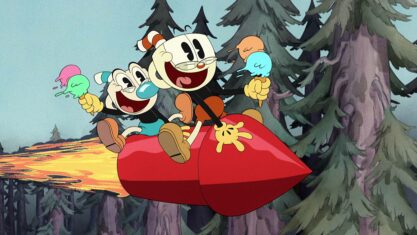 Netflix has confirmed that The Cuphead Show! will begin streaming on February 18th.

As the title suggests, the animated series is an adaptation of Cuphead, the hit 2017 run-and-gun platformer from Canadian indie developer Studio MDHR.

Produced by Netflix Animation, the 12-episode series follows Cuphead (Tru Valentino) and Mugman (Frank Todaro) as they get up to all kinds of misadventures on the Inkwell Isles. In addition to the two bowl-shaped brothers, other characters from the game set to make an appearance include Ms. Chalice (Grey Griffin), the Devil (Luke Millington-Drake) and King Dice (Wayne Brady).

Chad and Jared Moldenhauer, who founded Studio MDHR, serve as executive producers on The Cuphead Show!

2022 is set to be a big year for Cuphead. Beyond the animated series and the fifth anniversary of the game coming in September, the long-awaited The Delicious Last Course expansion is set to release on June 30th, 2022 on Xbox, PlayStation, Nintendo Switch and PC. The DLC will add Ms. Chalice as a new playable character alongside new bosses and levels.