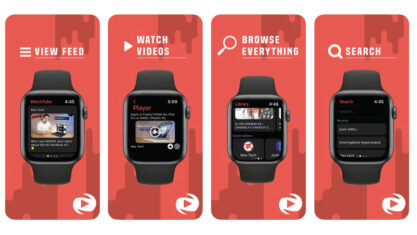 While the Apple Watch is already a versatile gadget that allows you to answer calls, send messages, monitor a range of health and fitness parameters, and even listen to podcasts, its lack of a browser, or a dedicated YouTube app sends users rushing to their iPhone.

A new third-party app fixes that.

WatchTube is a new Apple Watch app that lets you stream YouTube videos directly on the wearable, as first reported by 9to5Mac.

The app is available to download directly from the WatchOS App Store, and doesn't require any complicated setup. You simply download it, and it's good to go.

The app is straightforward, which makes sense considering the restrictions of the screen on which you'll be navigating the UI. WatchTube features four swipe-able panes, including 'Home,' 'Search,' 'Library,' and 'Settings.'

The search bar works well with the Apple Watch's keyboard, and also allows you to use dictation to search for a video.

Users can even subscribe to channels and save videos in the Library page to access them later, though the WatchTube library is entirely local, therefore it cannot be linked to your actual YouTube account.

While the WatchTube app serves its purpose, I don't think many would become avid video content consumers on their Apple Watch, and the app would rather be used for situations where you need to find out information regarding something via a YouTube video, and you don't have your phone around you.

Additionally, according to a WatchTube developer, a future update to the app will bring an audio-only mode, allowing you to listen to music on YouTube without needing to have the Apple Watch display on.

WatchTube is available for free in the App Store.