With the clock ticking down in the Spanish Super Cup semi-final between Barcelona and Real Madrid, Los Blancos held the advantage thanks to a late Karim Benzema goal. 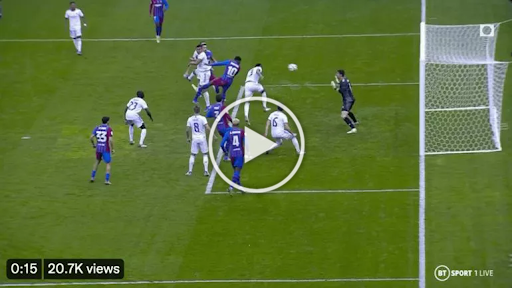 That added to Vinicius Jr’s opener which itself was cancelled out by a scuffed effort from Luuk de Jong.

On his return from injury, Ansu Fati took a fabulously absorbing El Clasico into extra time, after glancing a header well beyond the reach of Real keeper, Thibaut Courtois.

Carlo Ancelotti is likely to be furious with the marking at the back, however.

Fati rose highest in the box but was unchallenged despite the presence of a number of Real Madrid defenders.

It left the Belgian stopper with no chance as the ball nestled into the net.

Leave Ansu Fati unmarked in the penalty area and you will be punished… ?#ElClasico pic.twitter.com/8Xuo6nNxde