Video: Busquets at fault as Vinicius shows Barcelona defence a clean pair of heels to put Real Madrid ahead - Bliteoc

Video: Busquets at fault as Vinicius shows Barcelona defence a clean pair of heels to put Real Madrid ahead 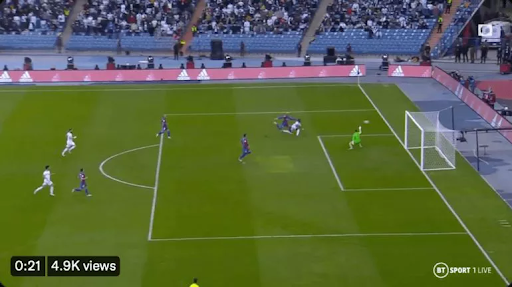 In fairness to Real Madrid, a goal had been coming long before Vinicius Jr. finally put Los Blancos ahead against Barcelona in their Spanish Super Cup semi-final.

Carlo Ancelotti’s side had bossed the game from the outset, and had left the Catalan club chasing shadows for the most part.

They had been knocking at the door for a while, though it would be a terrible mistake from Sergio Busquets that led to the opener.

Barca’s captain dilly-dallied in midfield and took far too long on the ball, allowing Karim Benzema to rob him.

A sharp exchange of passes saw the French centre-forward release Vinicius who was already on his bike expecting the pass.

Barca defender, Ronald Araujo, is quick, but not even he could catch up with the Brazilian, who fired home high into the net.

It was no more than they deserved.

He shows his electric pace on the break to net his 15th goal of the season ?#ElClasico pic.twitter.com/vz9wWHy9ps

A man in top form, Vinicius Jr. ?
A huge goal in the Spanish Supercopa! pic.twitter.com/kqiVi5HvEQ