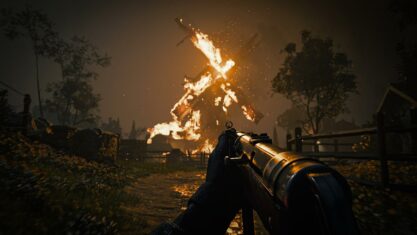 Phil Spencer, longtime Xbox boss and newly appointed "CEO of Microsoft Gaming," says the company has no intentions of taking Call of Duty off of PlayStation following its acquisition of Activision Blizzard.

On Twitter, Spencer tweeted that he had "good calls" with Sony leaders this week about the future of Activision Blizzard's games on PlayStation.

"I confirmed our intent to honor all existing agreements upon acquisition of Activision Blizzard and our desire to keep Call of Duty on PlayStation. Sony is an important part of our industry, and we value our relationship," said Spencer of these calls.

On January 18th, Microsoft announced plans to acquire Activision Blizzard for a staggering $68.7 billion USD (about $85.9 billion CAD). At the time, it was unclear what this would mean for titles that have historically been multiplatform, like Call of Duty.

Amid this uncertainty, Bloomberg reported that Microsoft planned to keep some games available on PlayStation while making others Xbox and PC exclusive. More recently, a Sony spokesperson told The Wall Street Journalthat "we expect that Microsoft will abide by contractual agreements and continue to ensure Activision games are multiplatform."

What does this actually mean?

Given that the acquisition isn't expected to be completed until fiscal year 2023, it's impossible to say at this time whether Spencer is being truthful. For example, in the case of ZeniMax, Microsoft's last big gaming purchase, Bethesda subsidiary Arkane Studios' most recent game, Deathloop, was legally required to release exclusively on PlayStation 5 and PC in 2021.

However, Arkane's next game, this summer's Redfall, was later confirmed to be an Xbox and PC exclusive. Given that we don't the exact nature of "contractual agreements" for Call of Duty, it's possible that Xbox continues to release these games for some period but then, when these deals expire, shift to Xbox-only releases.

It's also worth mentioning that some industry experts, including reliable VentureBeat reporter Jeff Grubb, have speculated that Xbox might take a hybrid approach when it comes to platform releases. In other words, they theorized that the massively popular free-to-play battle royale game Call of Duty: Warzone would remain on all platforms (especially amid rumours of a mobile version) while the main annualized entries could become Xbox/PC exclusive.

Of course, Activision Blizzard also owns a wealth of properties beyond Call of Duty that have appeared on PlayStation, including Overwatch, Diablo, Crash Bandicoot and Spyro the Dragon. It's possible that Call of Duty remains multiplatform (either fully or only to some degree) while other franchises see Xbox-only releases. That would stay consistent with what Spencer is saying now -- he only mentioned Call of Duty -- while still allowing for other properties to become Xbox exclusive.

It should be noted, though, that Xbox's current approach deemphasizes the need for a specific piece of hardware to play its first-party games. Outside of native releases on Xbox consoles and PC, Xbox Game Studios titles like Halo Infinite and Forza Horizon 5 are playable on mobile devices via Xbox Game Pass' Cloud Gaming service. Further, the company has confirmed plans to bring this streaming service to other devices, like streaming sticks and apps for TVs.

Therefore, even if Call of Duty went "Xbox exclusive," the game be playable for PlayStation owners, in theory, via streaming on one of several devices they potentially already own. Streaming isn't as good as playable natively, of course, but it would give some options besides dropping hundreds of dollars on an Xbox console or PC.

Another big question pertains to how Microsoft will handle Activision Blizzard's allegedly rampant workplace misconduct. The company, particularly CEO Bobby Kotick, has been accused of fostering a "frat boy" culture that regularly led to the mistreatment, including but not limited to sexual abuse, of women. Many have called for Kotick to resign, although he reportedly won't do so until after the acquisition closes.

Ultimately, though, it's too early to say either way regarding exclusivity and company reform. What we do know, though, is Activision Blizzard and Microsoft will operate independently for at least another year. That means that the former's imminent slate of games, including this year's inevitable annual Call of Duty, will definitively release on PlayStation. Likewise, Microsoft will not be able to make any changes at Activision for the time being.