You can win these truly horrifying Sonic the Hedgehog Xbox controllers 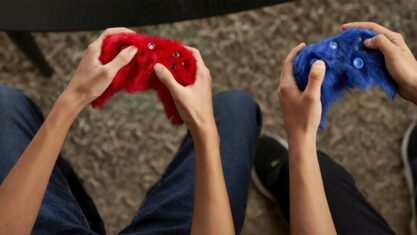 Xbox and Paramount Pictures have teamed up on a contest to win a prize package inspired by the upcoming Sonic the Hedgehog 2 movie.

Specifically, entrants can snag a custom black Xbox Series S console with the video game movie's versions of protagonist Sonic and antagonist Knuckles, as well as two controllers inspired by the hedgehog and echidna. However, these aren't just your standard plastic gamepads -- bizarrely, they've been given "textured" coatings to simulate Sonic and Knuckles' fur.

On Twitter, fans were quick to point out that these hairy controllers won't exactly mix well with palm sweat:

...Or food residue, for that matter:

If the console and/or (frightening) controllers are your thing, you can enter for a chance to win them over on Twitter by retweeting this Xbox tweet with the hashtag #XboxSonic2Sweepstakes. This method of entry is available in many countries, including Canada. The contest ends on April 4th.

In the new film, Sonic (Ben Schwartz) teams up with Tom (James Marsden) and Tails (Colleen O'Shaughnessey) to stop Dr. Eggman (Newmarket, Ontario's own Jim Carrey) and Knuckles the Echidna (Idris Elba) from conquering the world with the Master Emerald. Notably, the sequel was primarily shot in Vancouver, just like the first film.

Meanwhile, Sega's next game in the long-running Sonic video game series, Sonic Frontiers, is set to hit consoles and PC in late 2022.